So now we are looking at the dreaded side of self-publishing for most writers: self-promotion. Writers didn’t used to have to deal with this. Your publishing company would toot your horn, promote your book, and you could show up very humbly and sign for adoring fans. Those days are gone, even for 99% of traditionally published authors.

I have a bachelor’s degree in public relations, so I know what needs to be done in this field. I’ve read some good books and follow some blogs of other authors and their journey. Some things have worked for us, some have not. What I can speak to specifically is promoting a book for elementary and early middle school age readers. It is a very specific market, and what may work for an adult book won’t work for me. I have done dozens of live events and set up blog tours for my first two books. Here’s what we have learned so far.

Blog tours are an entirely separate beast from live events. When “Why Kimba Saved The World” released, I spent hours (I mean DAYS) setting up a blog tour. I screened carefully to make sure that the blogger wrote about children’s books and posted reviews consistently. Nearly everyone who agreed to take part in the tour did their part. I think there were about 10 of them. I made some great connections that I still keep in touch with, and we cross-promote each other. As far as all of that goes, it was a success. However, I don’t think any sales came from any of those posts. For “Vacation Hiro,” I set up a smaller blog tour, mostly of the sites who had already posted on “Kimba.” For Book 3, I did very little blog promotion. My big targets then were already established readers through social media and my newsletter.

I did get many, many reviews posted to amazon.com from those bloggers, especially for Book 1. That’s nothing to sneeze at (more on that in a later blog), but that’s not really the goal of a blog tour. You are supposed to be getting in front of new readers. I’m not sure blog tours, especially for kid’s books, work that way. At least not the ones you can set up on your own.

Paying for someone else to promote your books is an option on the blog tour front. The Mother-Daughter Book Review site has very reasonable packages, and they have a fantastic reputation. But it does feel rather like paying for a review (something I avoid), so I have not tried their services yet. That may change in the future.

When “Max’s Wild Night” comes out in May, I will definitely be in touch with bloggers, but the goal will be for reviews. The same will be true of “At the Corner of Magnetic and Main,” but it will be a whole new set of bloggers because this is an adult book. How much time I devote to finding them is questionable. I’ve made many connections through LinkedIn with those type of bloggers because I knew this book would come out one way or another. As long as it doesn’t become overly time consuming, I’m sure I’ll be working on connecting with them. I’ll try to coordinate the posts around the release date, but I’ll know more what to expect this time. If there are some sales, excellent. Mostly, I’ll be looking for reviews.

If you think a blog tour would be fun, go for it. There’s no harm, but you have to judge the amount of time you devote to it.

Live events are by far our best sales venues for me, but it matters where we go and how much we have to spend to be there. We have learned, the hard way, that spending too much for any booth or table space will leave us disappointed. If we are going to have hotel costs involved, we are not going to make money. Promotion is all good and fine, but if you don’t sell enough books to cover costs you are not making money. That is our goal. This is a business for us, not a hobby. My time comes at a price. If I’m busy with something else, I’m not writing. That’s one of the things that has to weigh into every decision we make about events this year. Some goodwill and getting yourself in front of the right people is okay. Just watch how much you put into that. After the last two years of live events, we have reached some conclusions.

One kind of live event we have not tried yet is an actual book release party. I will be doing a live book release event/party for “At the Corner of Magnetic and Main,” along with a Facebook/Twitter release event that evening. Again, because this book has a local connection I think we can have a fun party, and I can invite local friends, authors, and business connections we have in town from our Chamber of Commerce (we run a guest house too). We can have it right here on our property in our pavilion. Sales at the event would be great, but it’s more about goodwill and celebrating a book that has been in the works a few years and is set in our town. As long as we keep our goals (and costs) reasonable, it will be worth it. I’m sure you’ll hear more about all of this in September, when the big day comes.

Here’s a specific example of a live event that was worth the time, even if sales were not amazing. On Saturday the 7th I took part in an Author Day event at the Kimberling Area Library (near Branson, MO). This was the first time I had done it, but I knew they were hosting 40 authors, having guest speakers (including Roy Rogers, Jr.), and doing lots of promotion. I also knew other authors who were taking part. There was no table cost fee, and it only took us 45 minutes to get there, so there was very little risk if it was a complete bomb. I’d still have fun hanging around with my author friends. This event also was the kind of local goodwill that is worth taking the time for. I know people on the planning team and wanted to help make the event a success. We also learned that this library, which is really nice and well kept, is totally run by volunteers and gets no tax money. Definitely a cause worth supporting. 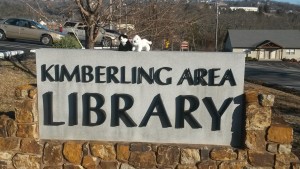 Kimba and Hiro’s travel reps pose with the library sign. They were happy to get out and about after a few months off. 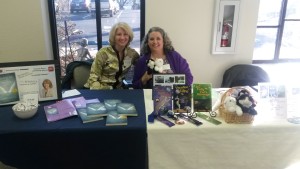 I shared a table with my friend Gwen, so that made the day even better. Check out her book, “Letting Go Into Perfect Love” at amazon.com! 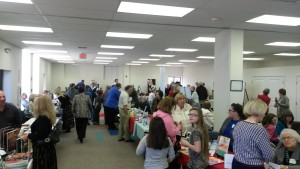 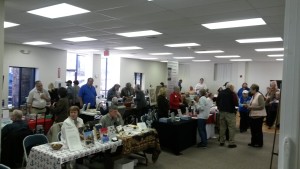 There was a nice turnout!

As far as library events go, this one was very successful. Dozens of people wandered through to shop for books. The speakers were well attended and enjoyed. I sold 11 books total, but that was more than many of the other authors there. We also had the oddness of three different people buying only Book 2, “Vacation Hiro,” because they liked the cat on the cover. That’s never happened before! 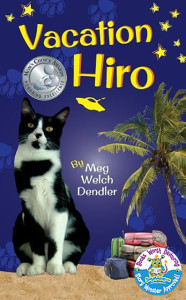 She is a beautiful cat!

I can only hope they will love it and want to read the whole series. I got names for my mailing list. It was all good. We made a donation of a part of our sales back to the library. It wasn’t much, but it was something.

Now, will I do this event again next year? I don’t know. I understand that they want to have a variety of authors participate for the same reason I may not do it again right next year—there will probably be mostly the same people attending next year and they want to see new authors. I will have two new books out by then, so that may weigh into our decision and whether they want me back. It was certainly worth having done.

One kind of event I have my eye on is something like the Texas Book Festival. The booth costs are high, but people coming to that event have one goal: to buy books. That’s where authors want to be! I was all set to attend the Texas Book Festival in 2015 and share booth space with a writer friend who has done it before. Our books would line up well together. It was all planned. But then they changed the date to be the exact same weekend as the War Eagle Craft Fair—our biggest sure-thing of the year. It was just too hard to justify missing it, and we might upset the organizer and have her give our booth space to someone else—they are hard to come by—, so I had to back out of the festival. But I still have my eye on it for 2016. I’ll have seven books to my name by the fall of 2016, if all goes as planned and the creek don’t rise, so it may be worth getting my own booth. I have family in Houston and Austin, so no hotel fees. This is one we will have to wrangle with in the future. I can envision Scott’s brow furrowing already.

Is there a Missouri Book Festival? I’ll have to look into that. The Arkansas Book Festival is more by invitation only, so I’ll have to find out whose eye I need to catch for that one, but that would involve a hotel stay. That alone may take it out of the running. This is another area to “stay tuned.” I’m sure more events will present themselves this year that we will have to weigh and decide on. No waste of money is our 2015 goal. We will be taking fewer chances, but we also may miss out on some good stuff. It’s a very fine line to walk, as it is with any business. Promotion is good, but it has to have a valuable outcome to make it worthwhile. We have learned a lot so far. We may have a long way to go.

Any thoughts to share on what has worked for you as far as blog tours and events? Share with everyone in the comments section!

I kind of skipped over this one because I had a live event to talk about, so we’ll circle back to that one—a subject I am up to my eyeballs in right now for “Max’s Wild Night”—next time.