Friends, here’s a special treat for you to enjoy this week: A guest blog from Cat McMahon at Cat’s Stories!! If you enjoy it, please be sure to visit her blog and follow her too. 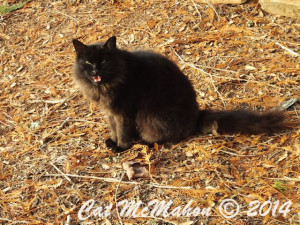 “You must attack me unexpectedly,” Dodger commanded Abby.  “I must keep my hunting skills and vigilance sharp!”

Dodger thought he was king over all, but he wasn’t the boss of her!  She reigned as queen of the castle and was only too happy to exert her influence as he requested.

Finished giving directives, she watched him retreat with pomp into the brushy hedgerow. 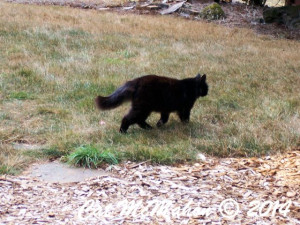 That he was a great king Abby gave no dispute as she had no interest in becoming street smart and outdoor savvy.  Whereas Dodger was inclined to believe in relationships of vertical alignment with her as second in command, Abby made it her duty to alter his “reality”.

She was his equal.

He could think how he wanted.  It didn’t matter to her if he needed to take credit for things and to think of himself as his highness.  She knew how things really stood, despite the elevated view he had of himself.

After all, she did have her purrfect pride to protect!

Abby trotted back into the house to plot and plan.  She’d spent much time cuddled up to the man of the house, studying marital arts movies with him.  What no one knew was she’d been secretly practicing the moves she’d learned and was eager to exhibit her mastery, feline style. 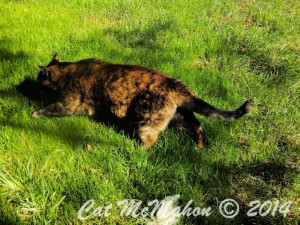 Now, she had Dodger’s permission to put into action what she’d been dreaming of doing for ages.  Little did he know that he had been her intended target all the while.

Pondering further, she decided to apply some tactics from one of her favorite cats, the Pink Panther.  That flushed feline might look good in comics, but . . . Abby’s sassiness was the real thing!

A Cheshire grin spread across her face as the vision coalesced in her mind.

Cattish delight thrilled her fur tips, and she pushed against it as if receiving a pet from the woman of the house.

With her plan in place, Abby went to work setting up her traps and hiding her tricks.  When the hour of opportunity arrived she’d be ready. 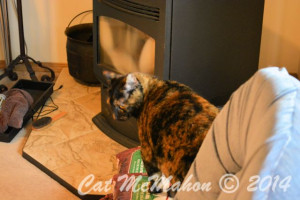 The woman of the house started dinner at 5:00 p.m. every evening.  Like clockwork, Dodger scratched at the door to be let inside and ran to his dinner plate.

Situating herself; she laid in wait. . .

Abby pounced Dodger as he supped and disappeared to watch him from the shadows.

Wild instinct kicked in, and true to his nature Dodger escaped the threat by dodging off into hiding.

Abby chuckled to herself.  She was the queen of “hide and seek”, her favorite game, and she always won!  That she was competitive by nature was a well-known fact; that she hated losing . . . well, there’s a reason for cats to have laid back ears and lashing tails.

Shaking off the annoying “losing” thoughts, she trotted off to roust Dodger from his secret place.

She knew all his hush-hush spots; he just didn’t know she did!

The scent of him stopped her cold at the woman of the house’s bedroom door.  Like radar, Abby tuned all her senses, zooming in on his location.

Dodger lay behind the bed, his most secure of indoor retreats. 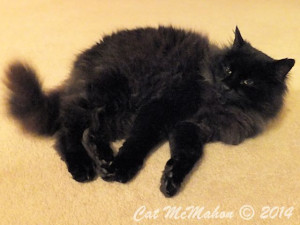 She crept silently across the carpet to the under-bed tunnel she’d dug through the storage boxes over the last few weeks.  Until now, the tunnel had served as her escape, one of her better hiding places when playing games with her human pets.

She slunk into the darkness, pulling her whiskers close, silencing every breath and waited.

Her joints stiffened.  The long wait made her ear twitch.  Her eyes never left his face.

Abby waited for the tiny, telltale, old-man cat snore.  A few more minutes and he heaved a ragged sigh before the wheezing snore set in.

Easing back out her tunnel she weightlessly sprung onto the bed landing near the edge, where she took up a vulture-like pose, perching over her sleeping prey below.

It was a harsh thing she was about to execute, but she had orders to obey.

Like Tigger, Abby wound up her internal spring and let go, pirouetting in mid-air to achieve the best bounce.

Landing with a hard thud, she slipped off Dodger’s back end as he shot out from under her with a terrible “yeeeeooooow!”

Her head slapped the wall.  She slid to the floor in a tangle of tail and paws, her fur in uncomfortable disarray.

Victory had not escaped her.  She’d flushed him out, but good!

Slithering from the mess, Abby regrouped and gave pursuit.  She leaped over Dodger as he sped down the hall and hit the slippery dining room floor.  Spinning out until she gained traction, she darted into the living room and dove under the sofa, her chameleon fur instantly taking on camouflage.

Burrowing through the dust motes to the nearest exit, she dashed across open ground and under the man’s chair.  Laying low and peeking below the skirt, she made sure the way was clear.

On nimble paws she crept under the coffee table and took refuge under the woman’s chair.

From the dining room Dodger voiced his humiliation at her surprise attack.

Grabbing the chance, Abby quickly belly-crawled to the wall, flattened her body against it, and edged along to the end corner. 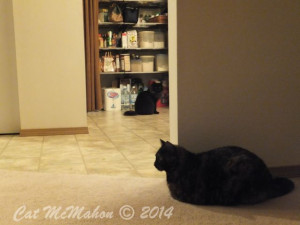 She quivered with delicious anticipation.

He was in her sights, still caterwauling.

Her inner spring wound up again, tighter than ever before.  Feeling her eyes widen, she switched her tail like a whip cracking through charged air.

Dodger rose from his sitting position and strolled toward her, unaware of he was being observed.

What luck!  Split-second timing was everything.

Her eyes widened into dark pools of abyss.

She launched herself at him! 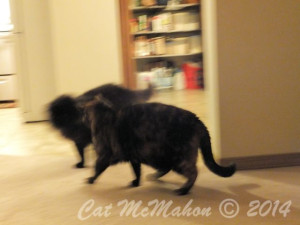 Duped, she hesitated for a split second.

His sucker punch came out of nowhere.

Almost before the ambush had begun . . . it was over.

Battered and beaten, and looking like a mangy alley cat, Dodger limped away, triumphant.

About the Guest Author 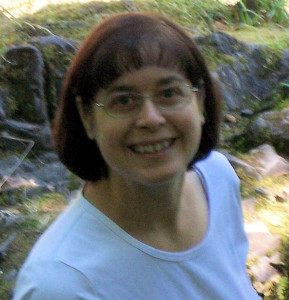 Cat McMahon is a wordsmith who enjoys outdoor discovery, culinary exploration, her cats and making memories with her family.  Her cat, Dodger, is the inspiration for CatsStories.com.  When Cat’s not in the kitchen cooking up mouthwatering gluten-free recipes for her website, GlutenFreeHomemade.com, she’s on the road photographing nature’s amazing wonders for her newest website, RoadTripExplore.com. Her most recent accomplishments include books presenting stunning scenery from locations both on and off road. 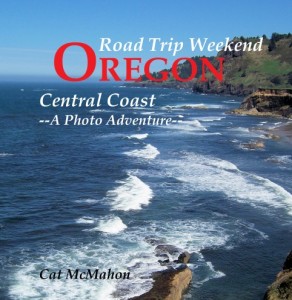 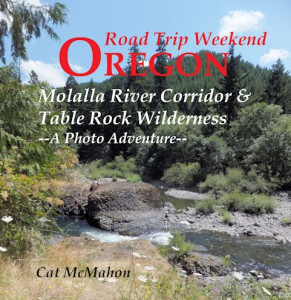 Vicarious travelers will enjoy an armchair tour of some of the most scenic areas in the world through the eyes of Cat and her family. As travel guides, explorers can use Cat’s books as jumping off points to create their own weekend adventures to wild and remote places.

The projected publish date for her third book in the series is Fall of 2014.

Cat and her family live in the craggy wilderness off the slopes of the Cascade Range in the Pacific Northwest, USA.  You can find Cat on Twitter, Pinterest, Facebook, YouTube, Google +, LinkedIn and Goodreads.