Holy Liver Snaps, this is a cute book! Doing a formal book review is a rare for me, but I wanted to do more than make a quick note about this one. The Big Honey Dog Mysteries: Curse of the Scarab is just adorable.

H.Y. Hanna and I bumped into each other on Goodreads and agreed to a read & review book swap. It was logical since our topics and genre looked to be very similar. I must admit, after I agreed to this I got a bit spooked. What if her book is terrible? But there was no need for any worry.  The moment my husband opened it up on his kindle (no, I don’t have my own) he said, “This looks cute. It sounds like your writing style.” I’ll take that as a compliment because Hanna’s writing is delightful.

This first book in the Big Honey Dog Mysteries follows Great Dane Honey as she tries to find a lost puppy friend who has been stolen, along with dozens of other puppies in town. With the help of her canine friends, Honey discovers a very creepy mystery that involves nasty scarab bugs and Egyptian curses. I should probably give a warning that young readers who are very sensitive may not be ready for some of the drama that unfolds. There is life-threatening peril along the way for everyone involved. Of course, if you like exciting drama, this book is right up your alley.

I’m very big on stories for young readers that have a moral or point of some kind, and Curse of the Scarab didn’t let me down.  There are deep-seated prejudices to be overcome. The traditional hatred between cats and dogs comes into play. Cats, who are referred to early in the book as a “bunch o’ sneaky, sardine-breathed sand poopers,” are going to have to become allies if the puppies are to be saved. And the stereotype of pit bulls as dangerous, killer dogs is faced head-on.  Again, without the help of Max, a rescued fighting dog, their mission won’t succeed.

Despite the overwhelming charms of Honey, I felt most in touch with the Beagle, Biscuit. I have had two Beagles in my life, and they both ate everything they could, just like Biscuit (though I kept a better eye on them than Biscuit’s owner). Heidi, my childhood Beagle, once ate an entire batch of oatmeal cookies that had been laid out on the table to cool. Three cups of oatmeal were in there. She was an unhappy dog. Eevee, my adult-age Beagle, once ate a two-pound box of chocolate creams that was a Christmas gift. Given fifteen unsupervised minutes, she went upstairs (where she NEVER went), found the box hidden behind a bookcase, unwrapped it, pulled off the plastic, and ate every chocolate (and probably some of the wrappers). We were grateful it was mostly cream and gel inside! She had an unhappy night, but the next day I caught her pulling the wrappers from the garbage. Too strong a nose is a dangerous thing.  Every time Biscuit got caught eating something in the story, it just made me smile. I bet dog-lovers will find the same kind of attachment to one of Honey’s friends in the story.

Big Honey Dog Mysteries: Curse of the Scarab, is a wonderful book. The writing is light and funny, as well as serious and heart-wrenching.  I highly recommend this for middle grade readers–and frankly for dog lovers of any age.

A sequel to this book is already underway, and I’m excited to see what H.Y. Hanna has planned for Honey and her friends at the dog show.

You can find out more about the real Honey Dog and upcoming books at H.Y.’s fantastic web page www.bighoneydogmysteries.com. 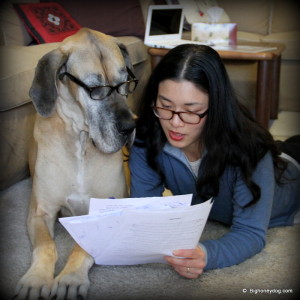