For the second installment in my self-publishing reflective journey it only seems prudent to start with the most logical but often overlooked part of the business: You have to write a good book. It would seem like this goes without saying, but from what I have found out there in the indie-pub world it is a major problem. Just because you wrote it and love it does not mean it is good enough for publication. I’m not even talking about technical stuff and proofreading. Write a good story. Readers still want a good story. As I take stock of the projects Serenity Mountain Publishing has going forward, this is still our number one goal.

As with anything that becomes easy and inexpensive to accomplish, like self-publishing, not everyone doing it should be doing it. My husband and I have a running joke that at every event we attend selling my books someone will stop at our booth and tell us how she has a great book idea…if only she had the time to write it. Being a writer and producing a good book is not a matter of having some spare time. Actually, most writers can tell you stories about what they gave up to find time to write. Writing is an art. Writing is a craft. Writing is a business. As with anything else under those banners, someone who has never even dipped his toe into the medium and magically thinks he can produce a good book simply because he has a good idea is living in a fool’s paradise.

Writers don’t just write, they go to workshops to perfect their craft. They go to conferences to network and learn from other writers. They have their writing critiqued and edited and listen to beta readers and redo and rewrite until they think their heads will explode and maybe their hearts will break. Double that effort if the manuscript has potential to be really good.

If you have never published your written words (your blog doesn’t count), start out with some articles or short stories. Submit to literary magazines. Find a writer’s group in your area. Go to local and regional conferences and enter their annual competitions. Get genuine feedback on your writing. Mom and Dad don’t count. If you have an idea for a book, by all means write it. Work on it. But you should probably wait to publish it and put it out into the world until you are sure it is the best it can be.

I’ll use “Why Kimba Saved The World” as an example because it’s the best one I personally have. Week 1’s blog already established that I had the first part of being a writer in hand. I had been edited and critiqued and published substantially. I was a genuine freelance writer. I had the foundation I needed to take this story idea—about my cat being part of an alien race that communicate with the mother ship through the mirrors in our homes and maybe want to take over the world—and turn it into a book. This was also not my first stab at writing a book for children. I have a few still in my drawer waiting for the right time and story evolution to publish them. A picture book idea was declined “with regret” years ago, which depressed me at the time, but now I know that it should have been encouraging. I got a personal answer at all! 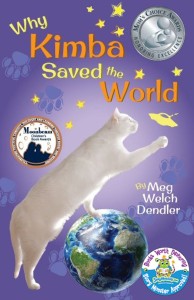 “Kimba” started off as an early reader book in 2011. With over a decade as a reading-focused teacher and tutor, I saw a big hole in quality reading for first and second grade kids who are ready for chapter books. That’s what the first draft of “Kimba” was aimed toward. Simple story. Simple writing. Story wise, it was okay. There’s only so much you can develop at that level, but I was happy with it. Submissions began and went on for over a year. “Nice, but not right for our list” came from the two or three publishing houses who even bothered to respond. One agent agreed to read it but then didn’t feel it tickled her fancy quite right. None of this is uncommon, even for books that end up being huge traditionally published successes, but I was running out of options. Most publishers are closed for non-agented submissions.

So I revisited the manuscript and pondered its future. One idea that niggled at me was that maybe I should kick it up a notch for older readers. That would allow for so much more story development. A few weeks later I got back the critique results for “Kimba” from an agent at the SCBWI conference in Brazos Valley, TX. (If you write books for kids and do not know about the Society for Children’s Book Writers and Illustrators, stop reading this now and click on the link to find out more!) She thought it was a cute story but suggested that it might be a good idea to develop it more for older readers. Ding, Ding.

My tweenage daughter wanted to take a couple of friends to Dave and Buster’s for her birthday party, so I armed them each with a prepaid game card and set them loose. Then I tucked myself in to a booth in the bar area and began to “what if” for Kimba and her story. This is a tried and true method for breaking writer’s block or helping a story progress. For over two hours, I just made notes. I imagined all kinds of side stories for Kimba’s character and developed what other characters she would need around her during those adventures. I filled pages of a yellow legal pad. When we walked out of Dave and Buster’s, I had ideas not only for a more developed version of “Kimba” but also for other books in the series. The titles for “Miss Fatty Cat’s Revenge” and “Slinky Steps Out” came quickly afterward. Months of revisions and notes and rewriting followed. I got inspirations at conferences. My beta readers gave me ideas. It sat in the drawer now and then and rested. My editor got her two cents in.

By the time it was published, I felt that “Why Kimba Saved The World” was in the best shape it could be. That doesn’t mean it is the best book ever published, or that I wouldn’t tweak a few things now, but it was ready. It has been rewarded with predominantly good reviews (which is the best you can hope for), won a Bronze Moonbeam Children’s Book Award as “Best First Book” in the chapter book category, earned a Silver Mom’s Choice Award, and is Story Monster Approved by kids. Over 15,000 copies are out there in the world on kindle or in paperback. All that tells me that I’m on the right track, but that doesn’t mean that I didn’t go through all the same dramas with the next books along the way.

Writing well should always be the first goal, and it’s a never-ending process.

A good book doesn’t just leap fully developed from the head of Zeus. Okay, there’s always that one example of lightning striking that everyone loves to hold to. I’m not saying it has never happened. What I’m saying is that I have attempted to read many, many self-published authors who THINK this is what happened for them. They are absolutely wrong.

Learn how to write. Get writing experience. Become a writer. Keep becoming a better writer. Professional actors still take acting lessons and have coaches. Professional singers continue to get training and work with teachers. Professional writers are exactly the same. Every book, every story, is a new adventure, and it needs the best you have in you.

Here’s the thing. If you are not really interested in being a writer and learning the craft, you are wasting your time publishing a book. It only gets harder and more demanding from there. We will talk about goals and target market later. If you are just doing a family memoir that no one but your kids will ever read, whatever. I’m talking about a genuine book. One that could be sold at Barnes and Noble on the shelf next to traditionally published books. If that’s what you want to produce, write the best book that you can.

I’d love to hear who supports your writing! My husband and family are always my first readers—and are happy being totally honest with me—and I pay editors along the way. Currently, I am a member of SCBWI, the Ozark Writer’s League, and an honorary member of the Northwest Arkansas Writer’s Workshop. I’ll make it to a critique session one of these days! Find the other writers and readers who can support your journey. Write the best book that you possibly can.

Do you enjoy face-to-face critique groups? Do you use beta readers? What associations, groups, and conferences have been most helpful? Who has supported and is supporting your writing journey? Share in the comments section below.

PS: My Word of the Week video for Stanley and Katrina is live. Max joined me for this one since his book is up next. Click here! It’s a great program to follow for kids at home or in a classroom setting! 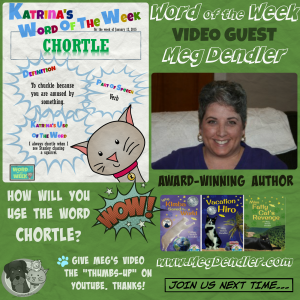 I also just finished proofreading a book called “Depraved” for Pen-L Publishing. Excellent! I’ve seen the cover, and it is fantastic too. An alternate title might be “Bitches Be Cray-Cray” because the characters in this book need some serious therapy. I’ll post the link once it is up.

Next week’s blog: Set Your Goals and Expectations